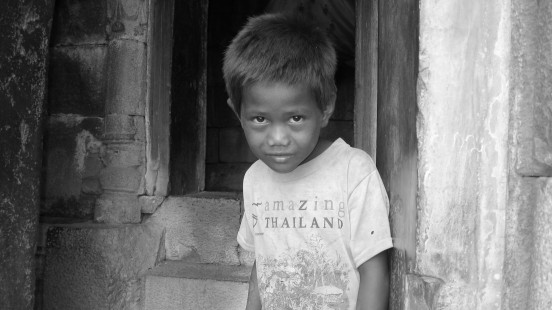 Posted in My Kind of People by Ben Brown Photography on July 24, 2013

On a journey from Battambang to Siam Reap, along the rice field canals, the Sangker river conditions were not good and the levels of the water were very low, making travelling by boat difficult.  Eventually we arrived at a Cham Village, were our spontaneous local guide showed us the Khmer temples, swallowed up by the Forrest

For a small country, Cambodia encompasses a surprisingly diverse range of terrain and scenery. Rice fields may be the quintessential feature of this predominantly flat and agricultural land, but there are also significant highland areas and 440km of coastline, as well as the massive Tonle Sap, Southeast Asia’s largest freshwater lake, which dominates the heart of the country.  In the east, the mighty Mekong River forms a natural divide, beyond which rise the mountains of Rattanakiri and Mondulkiri, where the last of Cambodia’s jungle can be found.  In the southwest, the heavily forested Cardamom Mountains run down to the sea, while parts of the southeast are regularly inundated, as the Mekong and its sister river, the Bassac, overflow their banks.

For all its natural beauty and rich heritage, Cambodia is still probably best known in the West for its suffering at the hands of the fanatical Khmer Rouge, who came to power in the 1970s with a programme of mass execution that resulted in the death of a fifth of the population. Their three-year terror was followed by a protracted guerrilla war that ended only in 1998 and left much of the country in ruins. Nowadays, however, Cambodia is at peace, and visitors will find it a safe place to travel.