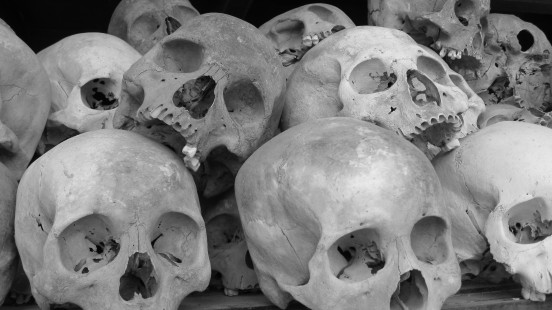 Choeung Ek is a memorial, marked by a Buddhist Stupa.  The Stupa has acrylic glass and is filled with more than 5,000 human skulls.  Some of the lower levels are opened during the day so that the skulls can be seen directly.

Many have been shattered or broken highlighting the brutality of the Genocide by the Communist ‘The Khmer Rouge’ led by Pol Pot, during their champagne of evil and social engineering policies in 1975 to 1979, where reform led to widespread famine and estimated 9 million Cambodians were murdered by their own people.

By 1979, the Khmer Rouge had fled the country, while the People’s Republic of Kampuchea was being established.  The governments-in-exile (including the Khmer Rouge) still had a seat in the UN at this point but it was later taken away, in 1993, as the monarchy was restored and the country underwent a name change to the Kingdom of Cambodia.

A year later thousands of Khmer Rouge guerrillas surrendered themselves in a government amnesty.  In 1996, a new political party the Democratic National Union Movement was formed by Ieng Sary, who was granted amnesty for all of his roles as the deputy leader of the Khmer Rouge.  The organization itself was officially dissolved sometime in December 1999